A day of celebration in traditional costumes and jewelry with the Queen of Arles. 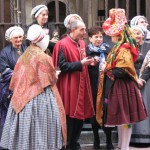 A day dedicated to regional and historical costumes 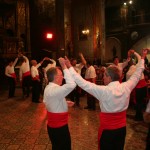 Catalan traditional dances in the celebration of Garnet of Perpignan 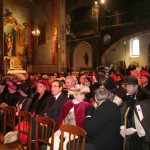 The church of Saint Matthieu in Perpignan for the celebration of Perpignan garnet.

In the spector of:

“Be a part of Saint Eloi,

3rd Feast of the Garnet of Perpignan”

For the past two years, the artisan jewelers of the Perpignan Garnet have reinstituted the traditional feast of Saint Eloi. In 2011, a special brilliance will be given to this event with the exceptional presence of the new Queen of Arles, Miss Astrid Giraud, on Sunday November 27th.

The day will be dedicated to regional and historical costumes. The feast brings together lovers of costume and costume jewelry which will be an integral part of the feast.

The artisan jewelers of the Perpignan Garnet, who maintain one of the most authentic traditions of Europe, invite you to join in a procession with traditional Catalan and Provençal music in the streets of the Historic Center of Perpignan, for a day of discovery of art and history.

We must never forget the ties between Catalan and Provençal, in preservation of their language and traditions.

PROGRAM OF THE DAY

All lovers of the local costume of their region, province or country of origin are invited to this day dedicated to the celebration of costume and jewelry. A competition will take place during the morning in order to reward the best costume. A jewel in Perpignan Garnet will be  awarded to  the three best costumes. The Jury (Union, Brotherhood and Institute of Garnet) will judge according to authenticity and quality. The three best, will be awarded gold and garnet pendants. We launch this appeal to encourage the relationship between traditional costume and the jewel of the Roussillon, Catalonia, Provence and beyond. Again this year to all those who, like us, are lovers of traditional costume and history, the day is dedicated to you. In costume, you will discover Perpignan, jewelry and accompany the Queen of Arles in Provence. The Queen is symbolic of the historically strong links between Catalans and Provence.

Program of the day:
9:00: Room available for those who want to change. (Room available all day.)
(Location: Mercure Hotel, 5-5a Cours Palmarole.)

10:00: Assembly and then Departure from the front of the Palais des  Congres.

11:00: Procession of Celebration of artisanal jewelry, coronation of the Queen of Arles
(Location: St. Matthew Church)

12:00: Departure to the Place de la Loge for dances and presentation of Gold and Garnet prizes for the 3 most beautiful costumes.

15.30: Exhibition: “Jewelry and Fashion in Roussillon over time” followed by the ceremony of the presentation of Garnet Jewels to the Queen. Folowed by a film demonstrating the work of the Artisanal Jewelers of the Perpignan Garnet.
(Location: City old Theatre, Place de la Republique.)