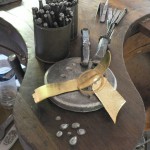 Today’s Perpignan Garnet Jewelry uses the same process of manufacturing that was practiced in Europe in the 17th and 18th century. During that period the stones available were very small and required “paillon” or stained silver foil to optimize the color.

The design of jewels and the tools needed for their manufacture, for the most part, have remained the same for two centuries. Technical progress has not been a substitute for manual practices.

The Stonecutters cut the stones that are today referred to as the “Perpignan cut” or “Rose cut”. The Rose cut also appears in the first decades of the 17th century. It was then codified by the Dutch diamond dealers. This standard was extended to include all other stones.

The art of Roussillon Jewelers is today in a process of resurrection. However in1926, ajeweler was quoted to the contrary: “…it’s terrible to realize that our traditional jewelry, as is with the Catalan costume, is losing its popularity and its fashion…The causes are evident, the evolution of fashion, the diminishing regionalist spirit, the need to appear more modern and finally the high prices of Catalan jewelry.”

Other problems to affect traditional jewelry, were two world wars that blocked the supply of garnets cut in the French Jura in the city of Saint Claude, or from Germany from the city of Idar Oberstein. Jewelers had to resort to the mounting of imitation stones to reduce costs. The President of Catalan Jewelers stated: “since 1939, the manufacture has been declining because of raw materials and it will disappear completely if measures are not taken”. In effect, the protectionist decree of 1920 prohibiting the importation of so-called luxury or fancy and non-essential articles, possibly hampered the supply of foreign garnets. Since the stones were all imported, their scarcity required Jewelers of Perpignan to use more and more synthetic stones, which were manufactured in Perpignan by Bartissol. 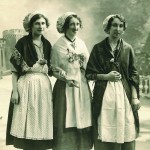 From the end of the 19th century and between the two world wars, the regionalist spirit diminished among younger Catalans. The aspirations of the Catalan population turned to modernity, relegating regional traditions to second place. Garnet jewelry continued mainly as an adornment for Catalan wives, who represented, during the interwar period, a strong regional identity.

The social and economic upheavals at the end of the glorious 30’s proved a fatal blow to this sector that had until then been a flourishing artisanal production. Many workers found other employment through the mutual assistance of the Brotherhood of Jewelers.  Others found jobs with the administration of the city of Perpignan through the assistance of the jeweler Augustin Colomer, founder of the Chamber of Artisans and Mastercraftsmen Mutual Association in 1927. 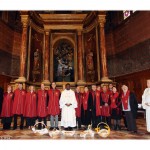 In the 1980’s France saw the reawakening of awareness of local heritage and identity, the Roussillon also followed this evolution. A portion of the Jewelers Union defined itself by reestablishing local traditional methods and styles. They created the Association called “The Garnet of Perpignan” and proceeded to craft a trademark and a label. Traditional Jewelers then began an extensive renewal process, which included promotion, and was supported by the regional adviser of the Department of Craftsmanship and the Chamber of Crafts of Perpignan. The result is the creation of new more modern designs that prove the jewelry is still popular today.

Garnet jewelry today is the pride of the French Catalonia population. More than a simple traditional craft, they represent a strong symbol of identity.

Manufacture of the crimp 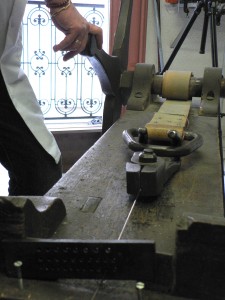 At first, gold is melted and then poured into a mould to obtain a plate. After cooling, it is hammered to temper the malleability of metal. Gold, in the French standard is 750/000e of fine gold, worked to achieve the necessary “sweetness”, to prevent it from breaking or splitting.

The jeweler begins by making a small gold wire with a thickness of 30/10 and3 mmwide. The wire is stretched manually, and then it is passed through a mill to crimp the gold. An impression is then made on one of the two faces. The crimp is used to set the stone. The gold is stretched through a series of channels increasingly fine. This work is now mechanized. 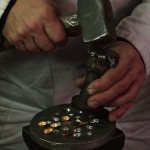 Once the operation is completed, the jeweler receives a crimp of a significant length that is cut to the exact size of the stone. This operation is very exacting because it must be perfectly sized. Each stone is worked individually.

The parts are soldered using a gas torch, formerly a mouth torch. A small piece of solder is used. The torch is activated by the breath of the jeweler. Some jewelry has twisted gold on the side exterior of the crimp. It is a round wire that was twisted and then soldered to the crimp.

The bottom of the jewel is made with a gold plate that is milled, to a very fine thickness. It is then cut to size of the stone with a découpoir (hollow punch). This operation is done on a wafer of lead to avoid breakage. The cutters allow simple shapes on the workbench. The punch gives a concave shape after pounding on the lead. 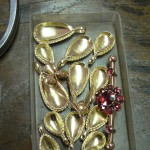 When the bottom plate is filed to the exact dimension, the two parts are soldered. Different mountings are fabricated one after the other. Six to eleven mountings are required to achieve a traditional cross.

With the help of a tool, craftsmen remove all traces of solder that appear on the mounting. The completed mounting is called “out of the fire” as can no longer pass under the flame once the stone is set.

Setting of the stone

Garnets used by the Jewelers of Perpignan have shades of color that differentiate it from older gems and new gems at first glance. These historical color nuances are not yet well known. A study based on a chronological shades and a scientific analysis of the stones will refine the dating of the gems and help us to understand the evolution of these shades of color in fashion, the quality and locations of the mines, and when they were mined.

During 18th and 19th centuries, other stones were traditionally mounted in closed back gold or silver mountings in Perpignan such as diamonds, citrines, emeralds, doublets and paste.

In order to enhance the luminosity and brilliance of the Garnet, a small sheet of silver foil with a red tint (paillon) is delicately cut then placed inside the setting. It serves to reflect the light and give brilliance to the stone. The “paillon” is usually the same colour as the stone with the exception of “brésils”, which mean citrines placed on red “paillon”, giving them an orange reflection. This very old process is closely linked to the technique of closed setting which consists of surrounding the stone in a metal base that completely encompasses it. This mounting is performed with a file, and then the metal is finely beaten into shape. After delicately placing the “paillon” in the claw setting, the Garnet stone is placed on an internal groove, and then is hermetically sealed.

This process is often in ancient jewelry with small stones such as rose-cut diamonds. 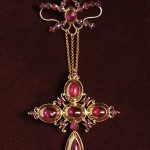 At the time of manufacture, the stone is placed in the mounting. The craftsman checks that the crimp edge is the same height and thickness. He then can begin the work of drawdown of the crimp for a mounted closed setting. This is very delicate work.

The famous “Badine” cross is realized with closed settings. Manufacturing requires several days of work. Only the stone hiding the hinge is mounted in claw setting. 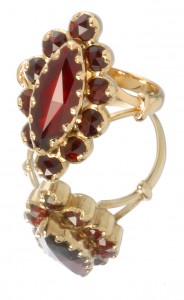 Another common type of mounting requires the claw setting. Today the majority of production uses this technique. In this process, all claws are cut in the crimp, then folded onto the stones, then filed to give them their pointed shape. The claws are rounded with a small file so that they do not snag garments.