In the inter-war period gave garnet jewelry a new impulse thanks to its capacity to adapt to the Art deco style. The number of jewellers is significant and covers most of the area of the Pyrénées-Orientales. Behond the great jewellery houses, such as Velzy or Charpentier of Perpignan, Prades is notable for its revival under Joseph Calvet, who married the heiress of a century-old Quès jewellery house, , in 1921. Augustin Colomer (1893-1973) of Llucia street in Perpignan, played a central role in a social and creative life of Perpignan. He founded the Chamber of artisans and mastercraftsmen mutual association in 1927.

One of the founders of the chambre of vocational occupation in 1930, he participated in the international exhibition of 1937 in showing garnet masterpieces, like the Castillet and the basket of flowers. In Llucia street, the Colomer house represents a key stage in the evolution of garnet jewellery in Perpignan. In fact numerous jewellers were trained in the workshop, like Lucien Bonafos (d. in 1948). He was a member of mandolin group, the “Gais Catalan Troubadours”, a proud nationalist, who created masterpieces exhibited in 1937 in Paris: a basket of flowers pendant and brooch shaped like the Castillet composed of 324 fine garnets. 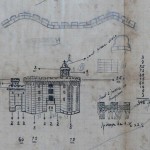 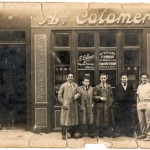 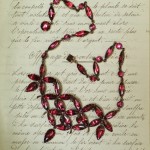