The garnet as a gemstone

Garnets are a group of complex neo silicates in a regular cubic form.

The crystals are most often in a form of a hexaoctahedron and a rhombododecahedron.

Their average hardness is 7.5 and their density of 4.32 which allows their use in jewellery.

Their colour covers a broad palette with many shades of red.

Since time immemorial, garnets have been used in jewellery; reds and purples are the most commonly used colours in Roussillon.

The pyrope is the highest quality used currently in Perpignan garnet jewelry. 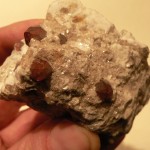 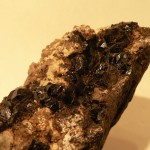 Garnets are formed of three groups of silicate associated with metal cations with the general formula: X 32+ Y23 + [SiO]3 where X and Y are ions respectively charged with positive charges (2 and 3).

The hardest of garnets (7-7,5) is often used in industry as abrasives (particularly the most dense pyropes because they are formed under great pressure).

Garnets are mainly used for sandblasting in the manufacture of micro abrasives.

It is used in the process of cutting by water-jets and in the woodworking industry especially in the finishing operations.

Left page: Garnet of Feuilluns in the Pyrénées-Orientales and garnets from Afghanistan, col. Calvet and Centre de Recherches Europeen, Tautavel.