The garnet today: More than ever in Catalan style 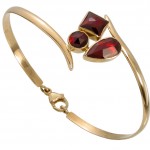 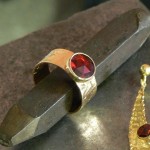 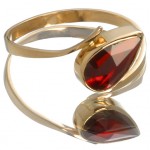 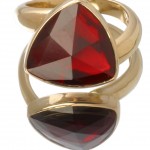 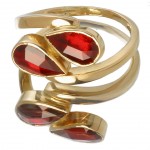 Without neglecting traditional methods of production, the Perpignan garnet today has been able to adjust to new designs. The return of the raised closed setting managed to satisfy two principles: the current tastes of the client, and respect for Catalan traditional techniques. However two schools have emerged: creation of a unique handmade piece, and that of the stylist which makes used of the latest techniques. There are two very different visions of working jewelry: one prefers the idea of a work of art in continuity with ancestral tradition, and the other prefers the design piece which is mass produced with computer technology. The beauty of the shapes and quality of the execution are understood by everyone as the only route to maintain the excellence of Catalan jewelry.

The sleek contemporary line of the Perpignan garnet jewellery should not lose sight of the qualities of production of the geographical area after which it is named: the Pyrénées-Orientales, proud of their Catalan culture. The term “traditional jewel” does not refer to a line unchanged and repeated from generation to generation, but its creativity is constantly adapting to the taste of the clientele and demonstrating fidelity to the manual skills and to the garnet itself. In the mosaic of world jewelry, the Perpignan garnet can be proud of its history and its authenticity.