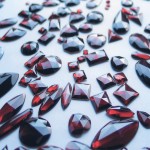 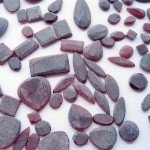 All the garnets of Perpignan are cut and worked for mounting in a typical style i.e. with a flat base and only work on one side. Best on ancient traditions, Catalan jewellery alone continues to practise this type mounting which has disappeared everywhere else in Europe, and the Catalan stones are finer.

Today, stone-cutting workshops of Idar-Oberstein in German Palatinate have taken over from the workshops of Saint-Claude in the French Jura since the mid-1950s, in order to supply the Catalan Jewellers with the so-called “Perpignan gem”.

The city of Idar-Oberstein specializes in cutting of coloured stones and is engaged in making all garnets which will be finally mounted in Perpignan. The enclosed mounting style practised in this region of southern France requires stones cut in a way which has little use in jewellery of other regions or countries in Europe.