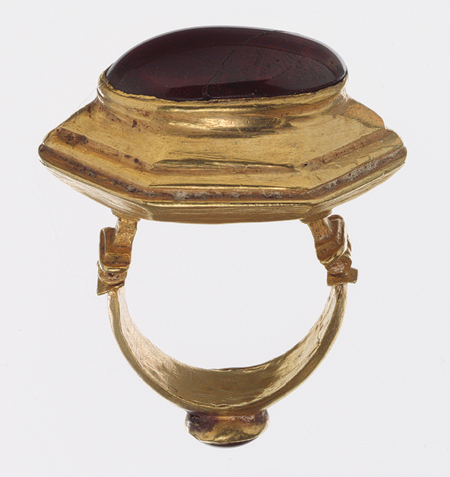 This large and flamboyant ring belongs to an unusual group of finger rings distinguished by the fact that they are  inged. Despite their wide distribution across the Mediterranean world and the minor variations in their design, this and the few other known examples were most likely produced in a single workshop. The size of the hexagonal bezel set with a plain but impressively large oval garnet and the circular bezel with a smaller garnet placed on the bottom of the ring suggest that it was meant to be worn on the thumb, and in fact the hinge mechanism allows it to be fitted securely onto the thumb below the knuckle. The mechanism, with its tiny gold pins, must have been rather awkward to open and shut, however, and probably required the assistance of a servant. The use of garnets is typical of jewelry of the late Hellenistic period, when it became fashionable to decorate gold ornaments with colorful exotic gemstones and pearls. This ring is a striking example of the extravagant and ostentatious lifestyle of the rich in the Hellenistic world.