Powerful and active after 1900 in an environment of regionalism, the Catholic Church also turned its interest to this gem, now a symbol of a people who once had built the Romanesque Abbeys and a Catalan culture always demonstrative in its lively faith. Some chalices were adorned with garnets such as the one Paul Soulié willed to his son, ordained as a priest in the Cathedral of Perpignan in 1905.

During the 1920s, Catalan Bishops closed to Jules Carsalade du Pont (regional Bishop of Perpignan from 1899 to 1932), as Bishop Izart and Bishop Patau, each carried an Episcopal cross embellished with garnets. The years 1900-1930 were auspicious for the revival of clerical jewellery as shown in the sketches of the cross and crowns of the Virgin of Font-Romeu.

The painting shows an interesting episcopal cross formed of four birds as the Holy Spirit, having a central element like a rose, and completed with an anchor, symbol of hope for salvation. Archives of the Velzy house in Perpignan. 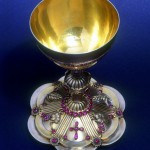 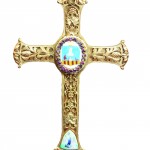