The Garnet at the crossroads of different aspirations 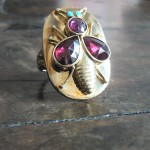 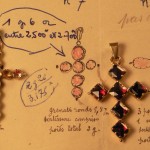 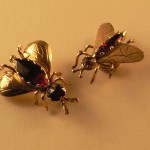 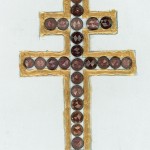 After the Second World War, Roussillon becomes one of the laboratories a new consumer society eager for holidays in the sun. Beginning in 1963, the Racine mission launched an unprecedented project to develop the coastal region, in order to allow millions of vacationers to stay on home soil, doubling the summer population of the Pyrénées-Orientales. An influx of tourists spread out over the interior, in the hotsprings, such as Vernet, Molitg and Amélie-les-Bains. Prades, in the centre of the region is a crossroads for the garnet jewel trade and is also a flourishing centre for the ancestral jewelry houses, Calvet-Quès and Quès-Barate, and notably for the workshop developed by Georges Lavaill. This jeweller is torn between respect for tradition and use of advanced techniques. He developed the new idea of creating an enamelled base (paillon), and creation of jewelry by a moulding process. Financial problems put a temporary end to his pursuit of modern methods in garnet jewellery. Later he became the celebrated metal-caster of Salvador Dali sculptures in Barcelona.

At the end of the 1980’s there was a flourishing group of jewellery craftsmen under the commercial banner of “Le Grenat de Perpignan”, now known as a confrérie (guild). This confrérie is working to preserve the original authentic artisanal methods.